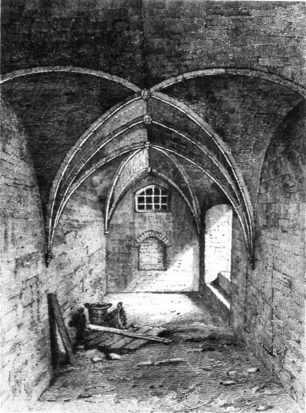 from Walker and Craddock 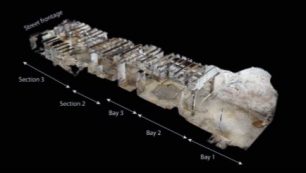 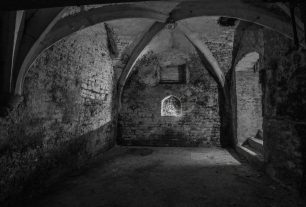 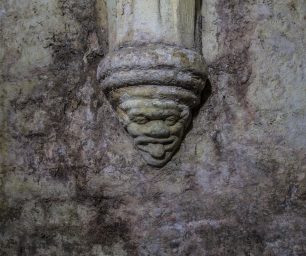 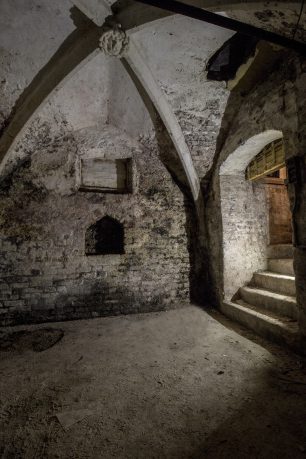 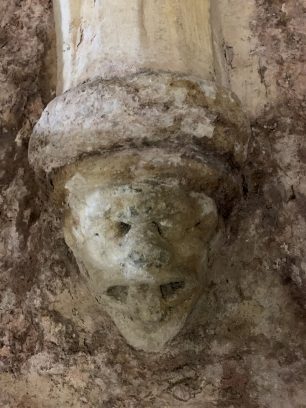 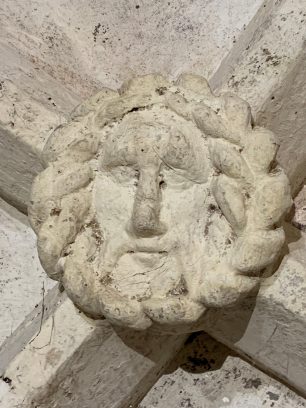 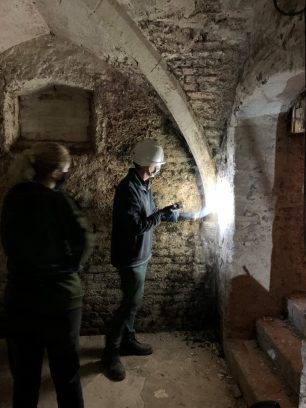 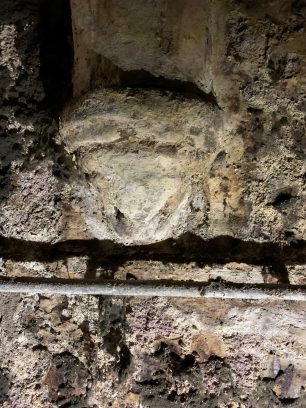 To take a virtual tour and explore the cellar beneath the Market Place, follow this link

Summary by Mark Gardiner and Phillipa McDonnell, University of Lincoln

The following has been extracted from a report on all three locations surveyed by the University of Lincoln in 2020.

The Victoria County History of Cambridgeshire (VCH) speculates that the building ‘must have served as the cellar of an important building, perhaps the Trinity Guild’. The guild acted as the ruling body of Wisbech until the sixteenth century. The VCH also describe the undercroft, following the account in Walker and Craddock, as having a groined vault; it is in fact, rib-vaulted. The details of the print of the undercroft published in Walker and Craddock are not always reliable. A rib is shown rising to a boss at the head at the west end of the first bay. The surviving structural evidence shows that there was no such rib at any time. Walker and Craddock described the cellar as under the house under shop of Mr Dieppe, who was evidently Thomas Dieppe, tailor, draper and hatter. By 1851 the premises passed into the hands of William Oldham, chemist.

The undercroft is currently entered through a trapdoor set in the floor which leads directly into the west end of the only completely surviving bay (see plan). The first bay has a quadripartite vault with brick webbing. The chamfered ribs rise from corbels set about 750mm above the present floor level converging at a central boss. The corbels were probably all decorated with heads, but most of these are so heavily eroded that they cannot be certainly identified. The corbel on the south-east corner of the first bay is less damaged and shows a grotesque figure with a projecting tongue (see photo). The central boss of the first bay is decorated with a bearded figure set in the border of leaves or cable-moulding (see photo). The figure may be a Green Man. The boss of the rib between the first and second bays is apparently a female figure set against a roseate background.

In the western wall was a window – now bricked up – with a chamfered sill. This is shown in a print in Walker and Craddock and described as then having a grate. The window would have allowed light to enter the undercroft by means of a light well, implying that the ground-surface building extended no further back than the length of the undercoft. Below the window has a lamp niche to illuminate that end of the undercroft. On the south wall is a larger window, which appears to be secondary to the construction of the undercroft the head partially cuts through the webbing of the vault. It appears to have been bricked up in two stages, both of which pre-date 1840, since no opening is shown in the engraving in Walker and Craddock. The sill of the window is recessed. The structural implication of this are not apparent.

The springing of the second bay and the first few stones of the ribs survive, but the remainder are concealed behind joists and an inserted floor. In order to reduce the height of the shop at ground level, the top of the undercroft has been removed. The north wall of the second bay is covered in render and no details of the walling are visible.

The evidence for the fabric of the third bay is also limited. Much of the north wall is covered in recent render, except towards the east end of the bay. It is probable that the undercroft originally finished at this point. There is no springing for a further bay, but it is evident that the wall ran across the end of the undercroft at this point. There is a now step in the wall at the point the original work stopped. There is also a slight, but clearly noticeable change in orientation of the next section of the undercroft at this point and it is also noticeable that it narrows. A change in construction period is thus clearly indicated. The total length of Section 1 is 9.50m by 3.03m wide.

Three periods have been identified, corresponding to the three sections of the undercroft (see plan):
• Section 1: the three rib-vaulted bays
• Section 2: the short extension to the east with two aumbries
• Section 3: the final extension eastwards towards the street frontage

The date of Section 1 must lie within the period after bricks were introduced, but while the medieval practice of rib-vaulting was still current. This suggests a date of construction later than 1300 (see below), but before 1550. Section 2 is not vaulted, but was apparently covered by timber joists. It was constructed from narrow bricks, which suggests a date of construction of between 1300 and 1650. The date of Section 3 is later and may correspond to the rebuilding of the street frontage, perhaps in the eighteenth century. The only other evidence for the dating of the building are the stone mouldings of Section 1. These cannot be dated very narrowly, but the corbels are more likely to be fourteenth or early fifteenth century than later.

The undercroft at beneath the Market Place shop, together with that beneath the Rose and Crown, suggest that this was an area of intense commercial activity in the late Middle Ages. However, a fuller understanding of the retail geography of Wisbech depends on a more extensive search for the presence of undercrofts beneath further buildings. Undercrofts were often built so that their vaults projected slightly above ground level. As a result, it was necessary to step up into the shop at ground-floor level. This is inconvenient for modern shops and to reduce the level in Market Place the top of the vault was removed nearer the street front. This has made undercrofts vulnerable to adaptation to later needs of retail, and may have led to the damage or infilling of other cellars. However, other examples may survive. The undercroft at Market Place may be one of a number of examples present in the town, but the rib-vaulting and the fine decorated bosses and corbels make it particularly notable.