You are here: Home>New contributions>Updating of The Merchants Trail by Dr Eric Somerville

Updating of The Merchants Trail by Dr Eric Somerville 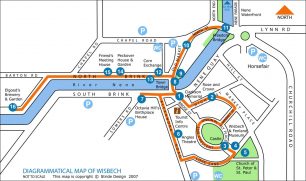 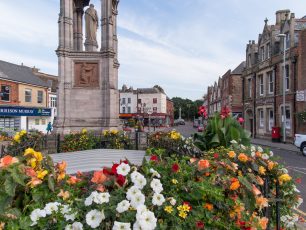 The merchant trail in Wisbech was devised some years ago as a visitor attraction.  Originally 16 town locations were identified, each of which told the story of Wisbech’s prosperity in the mid-19th C, a prosperity based on commerce and a busy port.

With the regeneration of the High Street it was decided that the Trail needed updating and I volunteered to undertake this with help from Penny Stocks and Roger Powell, both of whom had been involved in the setting up of the original Trail.

Those original 16 locations are still marked today by round numbered plaques set into the pavement. For each such location there is a fact sheet giving the historical background  and it is these that I have revised.  The Trail, marked on a map, starts at the Clarkson Memorial (1) and finishes at Elgood’s Brewery (16). An additional location, designated 11a, has been inserted into the Trail for the Wisbech General Cemetery along North End. Several prominent figures in the commercial life of the town were buried there and the chapel is currently being restored as a visitor centre, with a grant from the Heritage Lottery Fund, a project spearheaded by The Wisbech Society of which I am a trustee.