You are here: Home>News>Updated Plans for No 24 High St - "The Gap" 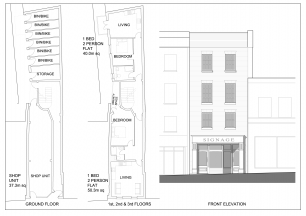 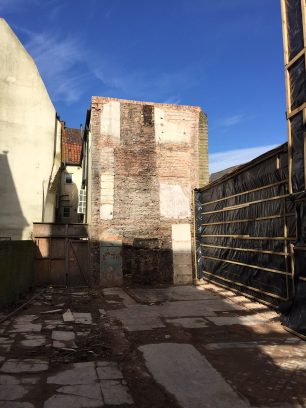 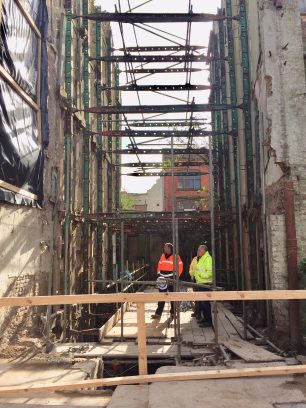 It’s been some time since we last updated you on progress of the “The Gap” community development project which was intended to be installed at No 24 High St, Wisbech. We are now in a position to be able to share some exciting news relating to the site and the new proposals for redevelopment.

From consultations at a very early stage in the Wisbech High St Project, the temporary structure was intended to address the derelict site at No 24 as a permanent structure was not possible due to complex legal issues affecting the property and the amount of funding which was available from the National Lottery Heritage Fund and partners, which would not have enabled a permanent building to be built on this site as well as address the derelict sites opposite and the rest of the High St.

For these reasons, the plans and designs for the temporary structure with community space and viewing platform were taken forward with the input and support from community groups and stakeholders – all their efforts and time are very much appreciated.

However, a series of investigations and surveys since The Gap plans were approved has led to a reappraisal of the costs involved. Soil investigations revealed that the piling costs to support the foundations were going to be significantly higher than expected and the complexities surrounding the actual build created a disproportionate cost of construction for a temporary structure. The Council continued to give serious consideration to the commitment and expenditure of additional Council funds for a temporary building which, after 10 years would need to be replaced at a further cost to the Council without the benefit of the funding from the Wisbech High Street Project.

Over the last 12 months or more, we have been working tirelessly on removing the legal restrictions and finally, last week we were informed that this had taken place. This means the site is now free of impediments. A derelict structure at the rear of the site has been removed, opening up the whole site for development.

With the costs of the temporary structure having been fully appraised it was agreed by the Councils Cabinet last year that an alternative, permanent structure should be considered and plans for an alternative scheme to incorporate a retail unit on the ground floor and flats above has been investigated. This alternative proposal will not only provide a permanent solution to the eyesore on the High Street but also provide much needed residential accommodation and a sustainable use which will secure the property for future generations. It was agreed that finding a permanent solution was a better use of resources and a better solution for the High Street.

We thank you for all of your continued interest in the project and welcome your support as the site at 24 High Street enters a new chapter in its life.

The Council will now take the plans for redevelopment forward – keep checking the website to see more updates as they are available.

To read more about this site you may be interested in the following links: