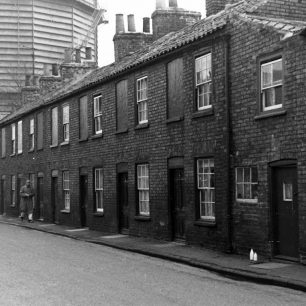 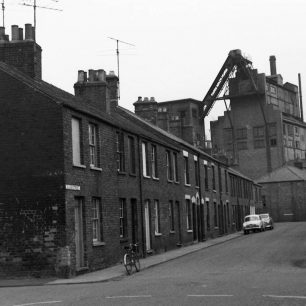 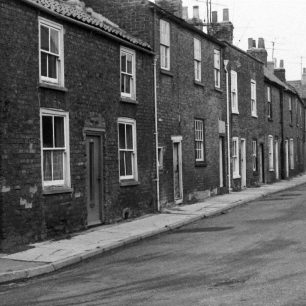 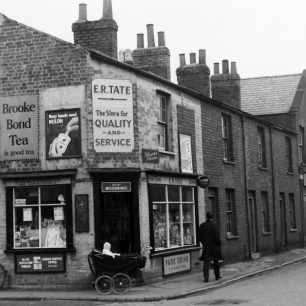 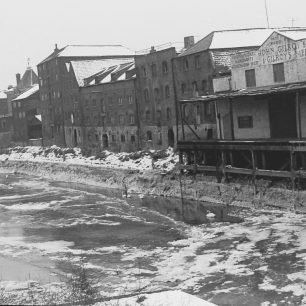 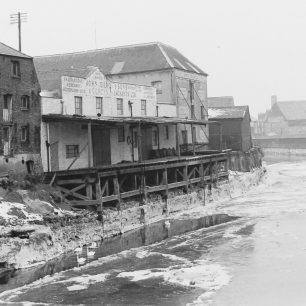 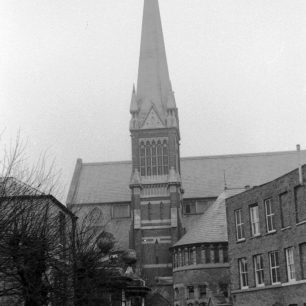 The Crescest, where the library now stands
Geoff Hastings 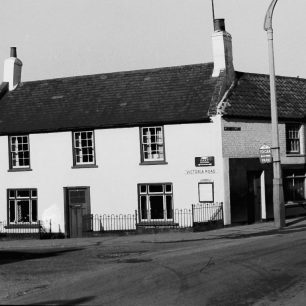 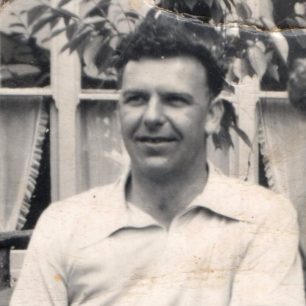 Geoff Hastings had an eye for detail, but probably never more so than when he was employed as an inspector for the Air Ministry during the war. Although working locally he was the holder of an AID (Air Inspectorate Dept.) stamp, the keeper of which was authorised to pass aircraft components as fit for purpose within the stringent quality control scheme of aircraft manufacturing.

That eye for detail continued to affect the way he did things after the war, whether in his job at Cambridgeshire Motors on Elm Road or in his beloved hobby of photography. He worked almost exclusively with black and white 35 mm film and recorded his Family and their surroundings in the same way that most of us did at that time. Naturally, he did all his own developing and processing.

The difference with Geoff was that he realised that his surroundings had a very limited life-span.

Wisbech has seen many changes over the years but perhaps none more-so than the building boom of the 1830s through to the 1840s. John Wood’s map of Wisbech dated 1830 appears very similar to maps from the 1950s. The difference is that although they record the same streets, the buildings along them changed drastically beginning in the 1830s. Many of the more commercial buildings (the pubs and the warehouses) survived the levelling but the ordinary houses took the brunt of the remodelling. Up sprang street after street of new terraced houses for the workers at the railways, the docks and the many associated trades that relied upon those changing times.

It was in these houses that the vast majority of the ordinary Wisbech folk lived during those difficult years following the Second World War. Great Britain, financially, was on its knees and the average family was pleased to have a basic home, albeit with an outside loo and only a coal fire for heating.

Geoff heard rumours that the dried-up canal was going to be the site of a new dual carriageway road to relieve the town of traffic entering Wisbech from the south. The plans included a new bridge over the river near the police station and a large roundabout on the east side of the river adjacent to it. Most of the buildings on the Horse Fair had already gone and Geoff lamented the fact that he hadn’t had chance to record them. He decided that he wouldn’t miss the opportunity this time.

For the next several years, odd lunchtimes, evenings and weekends, Geoff would cycle round the locality, taking photographs of any street or building that he thought might soon be gone. He even ventured out to the surrounding villages when his friend, Ivor Pollington, could spare the time to give him a lift. Eventually his collection of images numbered in excess of three thousand.

I was fortunate enough to have been introduced to Geoff a few years before he died. I often visited him and his wife Mable and we would talk about the pen and ink drawings made from many of the photographs he took. I once asked what happened to the photographs as I had only ever seen his drawings. It transpired that their house in Opportune Road had been badly flooded in the 1978 inundation. Geoff told me that all his work had been destroyed and when they returned to the house after the flood the remnants of his ruined collection littered the rooms. He had been heart-broken and I was asked not to mention it again.

Following Mable’s death a few years later, their son, Peter knocked on my door and told me that they had been clearing the Family house when they stumbled upon an old shoe-box. He had brought it with him and handed it to me saying that the Family wanted me to have it. When I opened it, there were Geoff’s three thousand plus negatives, all neatly bundled and numbered. They had been found at the back of a high cupboard behind other articles and it may well be that their whereabouts had been forgotten.

I have since digitised the collection which records the majority of the lost streets and houses of Wisbech. I’m sure that Geoff could imagine their historic value but as the years roll by and fewer of us remember the ‘old town’, it will be left to the images alone to tell the story.