You are here: Home>History>No. 25 High Street 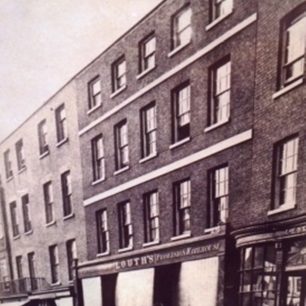 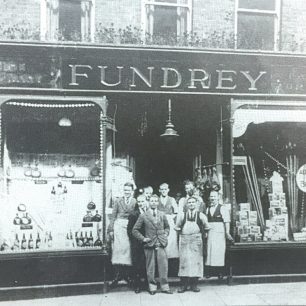 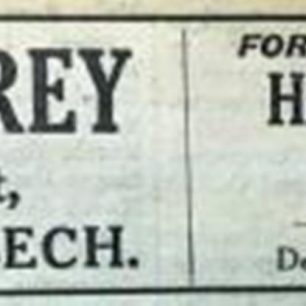 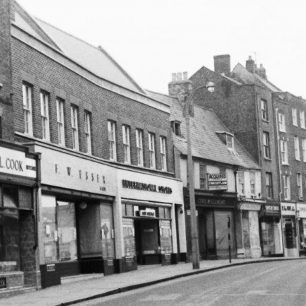 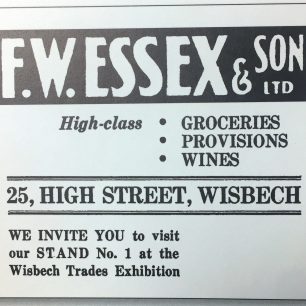 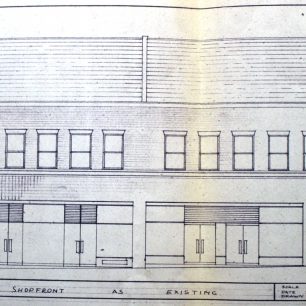 Architects drawing of existing elevation for 25-27, 1967
from FDC planning files 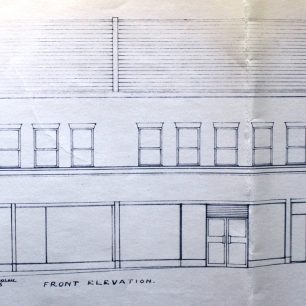 Architects drawing of proposed new shop front for No.25-27, 1967
from FDC planning files 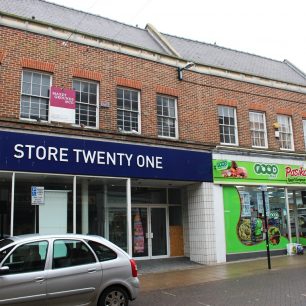 The current buildings at No 25 and 26-27 High Street are relatively modern, possibly thought to have been constructed around the early 1950s. Photographs from the 1960s show they were already constructed and occupied by that point. However historic photographs and records reveal more about the buildings which occupied the High Street here before.

A building on this site in 1777 is believed to have been a grocers run by Jonathan Peckover when he first moved into the town. Research undertaken by Diane Calton Smith for her book “A Georgian House on the Brink” has revealed that like many non-conformists of the time, Peckover had not received a full education but thrived in his business through hard work. Peckovers grocers become well known in the town for his trustworthiness and people asked him to look after their money in the shops safe. Soon the shop became known as “Peckovers Bank”. In time the bank became so popular it took over from the grocers and in 1792 Jonathan Peckover went into business with the Quaker Gurney family with whom they established a local branch of the Wisbech and Lincolnshire Bank. By 1794 Jonathans success had allowed him to purchase a house on the brink which became known as Bank House. From 1948 it became known as Peckover House, when it was acquired by the National Trust in honour of the family who donated it to them.

A Trade Directory from 1840 suggests Louth and Medworth, wholesale and retail grocers, tea dealers, coffee roasters and provision merchant was present in the High Street at this time although the building number was not given. However a historic photograph thought to date to the late 19th century clearly shows “Louth’s” where No 25 would be today. It shows a large four storey building with five windows on each floor and the shop signage reads “Louth’s Provision Merchant”. Joseph Louth alone is listed in the 1850 directory as a “wholesale and retail grocer and ale & porter agent” and by 1870 “Louths and Son, wholesale and retail grocers” is listed. By the time of the 1871 census, Arthur Louth, grocer has taken over and lives at No. 25 with his wife, twin daughters, a cook, a nursemaid, a housemaid and two apprentices.

By 1883 the grocers has been taken over by Clark and Hart and by 1896 it changes hands again to Parker and Hayward.

By the time of the 1916 trade directory, the shop, still a grocers, had been taken over by Walter Vince Fundrey who remained there until at least the early 1930s. A historic photograph shows staff standing proudly in the doorway of that original building Louth’s once occupied, but with a much bigger, wider shop front to accommodate their displays.

F.W.Essex & Sons had taken over by 1940-1 and images from the early 1960s show their shop was still there at that time. A planning application was submitted by J N Coleman on behalf of Essex & Sons in 1957 for “proposed re-building and alterations” and a photograph dating to around this time shows scaffolding around the building as the works took place. A later photograph from the 1960s shows a new building had been constructed by this time, interestingly retaining the same arrangement of five windows as the previous one.

In 1967 The International Tea Company Stores Ltd of London submitted a planning application to erect a new shop front and expand the premises to the rear at No 25-27. Architects drawings submitted with the planning application show the existing elevation at that time as well as the proposed alterations which it is assumed were constructed.

By the late 1980s the shop was BeWise clothing stores who were still there in 2001. The shop was later occupied by QS and is currently awaiting a new tenant.