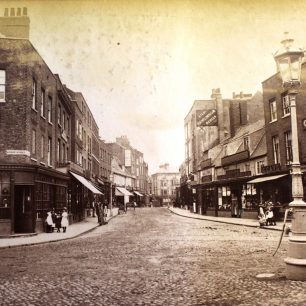 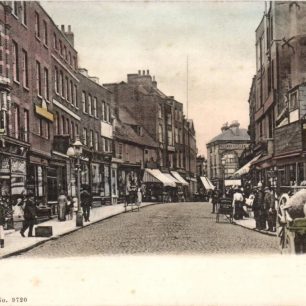 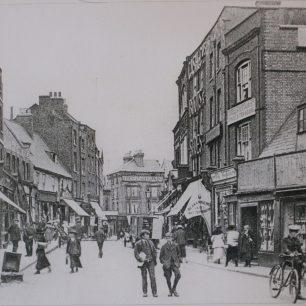 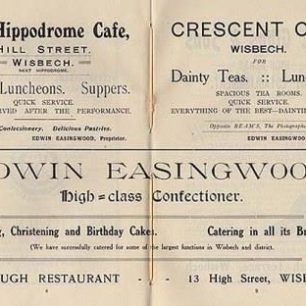 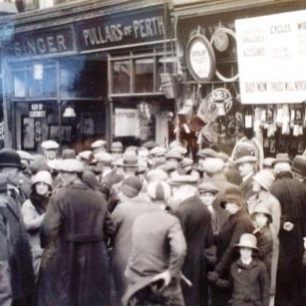 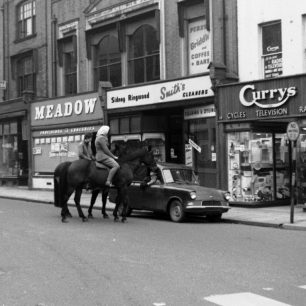 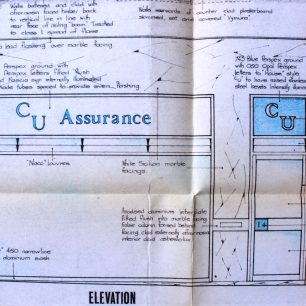 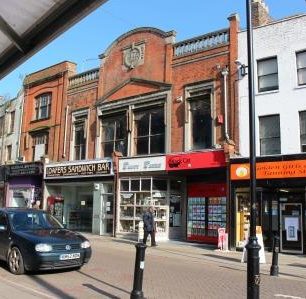 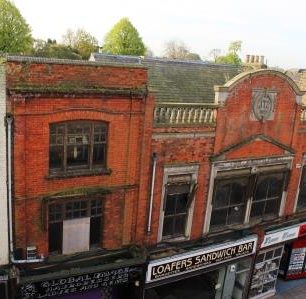 The current buildings at 14-17 were built in 1925 (No. 13 was constructed slightly earlier) in classical style with central pedimented bay and large first floor windows with stone surrounds. The building is dated 1925 and attributed to “JTE”. The parapet has stone balustrades. The ground floor has lost much of its traditional character, although one part of its historic shopfront survives. This building has three shops at ground floor level (14, 16 and 17) and is currently one open space at first floor along with No 13. This entire upper floor used to house the Boro’ Restaurant/Cafe and then a snooker hall in the late 1970s.

Photographs from the late 19th and early 20th century show a row of small terraced buildings where 13-17 currently stand. A photograph from the Stanton Album held at the Wisbech and Fenland Museum depicts a short terrace of two storeys with dormer windows. At this time the advertisements over the shops are for a drapers by the name of Loose.

An undated postcard which looks to be late 19th century by the costumes worn, shows that the Great Eastern Railways Enquiry and Receiving Office was trading from 13-17.

A later photograph also held in collections at the Wisbech and Fenland Museum, thought to date around the turn of the century shows the same row of terraces under the name of what appears to be Brenner’s Bizarre. By this time No 13 has been constructed, the sign above advertising as “Borough Restaurant Dining and Tea Rooms”.

Historic photographs and postcards show that this building was constructed earlier than the adjoining No 14.

In 1850 no. 13 High Street was occupied by Thomas Tims, a confectioner. A valuation book for 1865 reveals that the owner was John Collins (perhaps the china and glass dealer at No,11?), although the Tims family continue to trade from the shop until at least 1870 when a trade directory lists a Jemima Tims as the owner.  The shop is still a confectioners in 1883, run by Paul Williams and by Harry Hockney, pastry cook from at least 1896 until 1911 who is also occupying no 14. Still a confectioners No, 13 is run by Edington & Son in 1911 and by 1916 it is being run by Edwin Easingwood.

By the 1930s Edwin Easingwood appears to retain the shop but also has a cafe – presumably this is at first floor level which he continues to operate until at least the 1950s. An undated advert for Easingwoods describes the shop as a “High Class Confectioner” and is trading at No 13…Borough Restaurant.

By 1993 the shop is taken over by Pickfords and is currently occupied by “Global Image”.

Edward Jackson, clock-maker is the earliest name associated with No 14 from the Trade Directory of 1860 and 10 years later the shop is occupied by Robert Hewetson, a stationer and newsagent who remains at no 14 until at least 1883.

In 1860, William Goodger,a butcher was operating at No 15 and between 1870 and at least 1883, Jayne Springfield was running a “Fancy Repository” here.

By 1911 Max Brennar has opened a shop called “Brennars Bizzare” at no 14 and 15 as shown on the historic postcard and by 1932 Pearks Dairy Ltd has taken over where they trade until at least 1954. Photographs from the 1960s show “Purdys Griddle and Coffee Bars” above 13-17 – a well known name amongst many Wisbech residents.

Alterations were made in 1970 when a planning application was submitted by Commercial Union Insurance to change the use of the shop and to replace the shopfront. Details of the internal alterations and the architects drawings for the proposed shop front are held amongst Fenland District Councils historic planning files.

During the 1990s and early 2000s the shop was an estate agents. Today it is Loafers Sandwich Bar.

Historic records show that Mary-Ann Foster, a milliner was trading at No 16 High Street in 1850 and still there in 1861 at the time of the census where she lived with her husband Henry and three children. From at least 1840 until 1851 Henry Foster (presumably husband of Mary-Ann next door..?), a gun smith was trading at No 17. One of the earliest photographs of the High Street held at the Wisbech and Fenland Museum shows “Parker Haircutter” at No 17. A valuation book held at Wisbech and Fenland Museum records Alfred Bales as the occupier of 16 and 17 in 1865 and in 1869 but the buildings owner is listed as William Highbarn.

Kellys Directory of 1879 shows no 16 was a pawnbrokers under the name of Alfred Addison Loose, evidence of this is shown in the Stanton Photograph dated 1870s-80s. Loose must have been successful in his business as the next directory of 1883 shows he has a linen drapers and pawnbrokers at No 16 and No 17.

By 1900 No 16 and 17 are being used as the Great Eastern Railways Receiving Office which remains there until at least 1911 when its listed as the GER enquiry office.

By the early 1930s, presumably after the “JTE” building has been constructed, No 16 is used by the Singer Sewing Machine Company and No 17 next door is “Pullars of Perth”, later Pullars wool shop. These shops both trade from 16 and 17 until at least 1940. An historic photograph shows a busy crowd outside these shops in around 1930s.

Photographs from the 1960s show Sidney Ringwood at no 16 and Smiths Cleaners at No 17. By 1989 photographs from Fenland District Councils Conservation Files show Fancy Fayre has moved into No 16 and it is still trading there today.During the late 1980s and early 190s C&J Cylces operated from No 17, later to become a Sandwich Shop in 2001 and today it is a Property Lettings Agency.